Have you heard about this show called Mad Men? Okayyyyyy.... so maybe I'm a little behind the times because I just started watching it a few weeks ago. I kind of hate it, yet I Just. Can't. Stop. The sets! The clothes! The sexist remarks!  It's so much eye candy I spend most of the time grabbing screenshots, and sometimes while I'm waiting for Joan to return to the screen, I get to hear sweet little nuggets like this:
Mad Man 1 (about Peggy): "She's a lobster"
Mad Man 2: "Lobster?"
Mad Man 1: "Yeah, all the meat's in the tail".
I confess I may have repeated that joke about 45 times since I heard it. Who knew this show was going to be a comedy? Anyways, all of this Mad Men watching has inspired me to sew a slew of these retro aprons and add them to the shop. It's also inspired me to drink more cocktails before 10am; but don't worry, I always add a splash of coffee so's no one can say I have a 'problem'.
To round out the Domestic Goddess circle I've included a tart recipe that I made the other day. It's insanely good and probably the only dessert I'll ever make again; amen, the search is over. It's also the REAL reason I've drawn the above avatar. I keep sneaking in the kitchen for another slice, and once you start photoshopping the pounds off there's no turning back. Better to just start with an idealized drawing from the get-go.
If I may make a suggestion- bake this for your very own chain smoking philandering Mad Man. While he's eating it ask pointed questions like "How did you like that tart?" or better yet, "Who was that little tart that answered your phone?" Broad statements such as "I'm sorry you didn't like the tart, I know how you prefer redheads" may also work well to prompt a confession. Or not.  It's only a tv show. 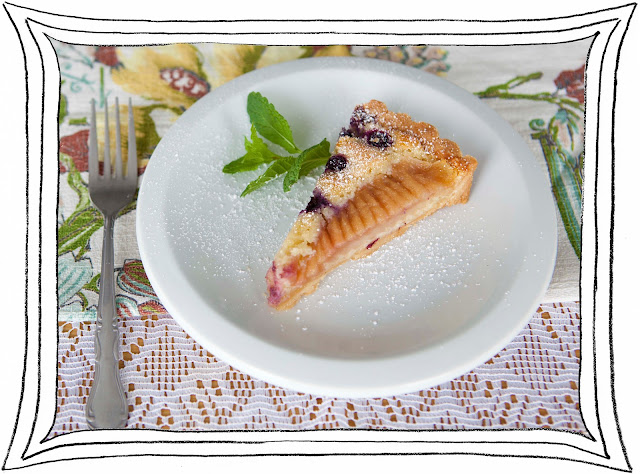 Sweet Tart Crust
1 1/2 cups all-purpose flour
1/2 cup confectioner’s sugar
1/4 teaspoon salt
1 stick plus 1 tablespoon (9 tablespoons) very cold or frozen unsalted butter, cut into small pieces
1 egg yolk
1. Put the flour, sugar and salt in the bowl of a food processor and pulse a few times to combine. Scatter the chunks of butter over the dry ingredients and pulse until the butter is coarsely cut in. You should have pieces the size of oatmeal flakes and some the size of peas. Break up the yolk and add it a little at a time, pulsing after each addition. When the egg is in, process in a long pulse about 10 seconds until the dough forms large clumps.
2. As soon as the dough is processed dump it into a 9" tart pan. Press the dough evenly over the bottom and up the sides of the pan. Don't press to much, or overwork the dough, just make sure the pieces cling together. With a fork poke holes in the crust so it doesn't puff up and shrink while cooking.
3.  To fully bake the crust: Center a rack in the oven and preheat the oven to 375°F. Butter the shiny side of a piece of aluminum foil and fit the foil, buttered side down tightly against the crust. I use martha wrap and put the parchment paper side against the crust. If you use this there is no need to butter it.  Put the tart pan on a baking sheet and bake the crust for 25 minutes. I usually make and freeze the crust a day before I  bake the tart. If baking frozen add 5 minutes to the baking time.
4.  Carefully remove the foil. If the crust has puffed, press it down gently. Bake the crust about 10 minutes longer, or until it is firm and golden brown, brown being the important word: a pale crust doesn’t have a lot of flavor. Transfer the pan to a rack and cool the crust to room temperature 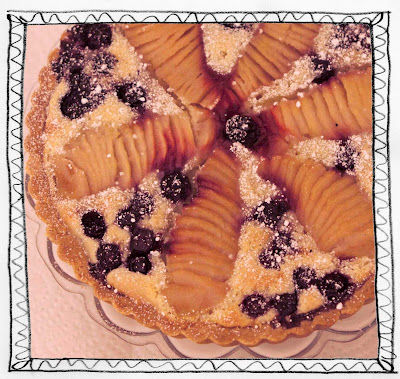 Pear and Almond Tart
Adapted from Smitten Kitchen
Pears
3 cups water
3/4 cups sugar
1 tablespoon fresh lemon juice
2 medium-size firm but ripe Bosc pears, peeled (each about 7 ounces)
1/2 cup blueberries fresh or frozen (if frozen do not defrost)
Almond Filling
2/3 cup blanched slivered almonds
1 tablespoon all purpose flour
7 tablespoons sugar
6 tablespoons unsalted butter, room temperature
1 large egg
1/2 teaspoon almond extract
1 sweet tart shell, baked (recipe above)
Powdered sugar (optional)
For pears:
Bring 3 cups water, sugar, and lemon juice to boil in large saucepan over medium-high heat, stirring until sugar dissolves. Add the pears. Reduce heat to medium and simmer until pears are very tender, but not mushy turning occasionally, about 20 minutes. Cool pears in syrup. (Can be made 2 days ahead. Cover and refrigerate.)
For almond filling:
1. Finely grind almonds and flour in processor. Mix in sugar, then butter and almond extract. Blend until smooth. Mix in egg. Transfer filling to a bowl. Cover and chill at least 3 hours. I usually make this a day ahead and store it in the fridge. Try not to eat it all before you assemble the tart.
2. Position a rack in the center of the oven and preheat to 350°F. Spread almond filling evenly in the cooled baked tart crust. Stem pears and cut each in half lengthwise; scoop out cores. Cut each half in half again, lengthwise.  Cut each quarter crosswise into thin slices. Gently press each pear quarter to fan slices but keep slices tightly overlapped. Slide spatula under pears and arrange atop filling like spokes of wheel with narrow ends in center. I only end up using 1 1/2 of the pears. The other half can be gobbled up right then and there.
3. Press the blueberries into the filling between the pears.
4. Bake tart until golden and toothpick inserted into center of filling comes out clean, about 55 minutes. Cool the tart in the pan on a rack. Push pan bottom up, releasing tart from the pan. (Can be made 8 hours ahead. Let stand at room temperature.) Cut tart into wedges; sprinkle with powdered sugar, if desired, and serve.
*********************************************************************
Stay tuned next week when I review this little show I heard about called The Soprano's. It's supposed to be pretty good.
Posted by Misty at 11:15 PM